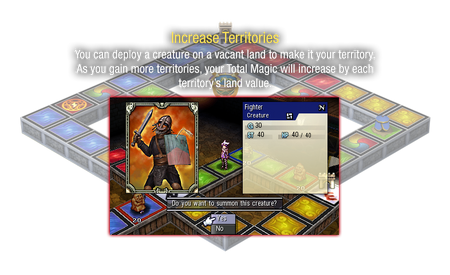 Magic is a key mechanic of Culdcept Revolt.

Your Current Magic is the currency you use in a match to play cards, upgrade territories, and pay tolls to the other Cepters. it's also known as "G".

To win a match, you must raise your Total Magic to meet the Magic Goal.

You can deploy a creature on a vacant land to make it your territory. As you gain more territories, your Total magic will increase by each territory's land value.

If you use the "Land Level Up" Territory Command to increase the level of your territory, both its land value and your Total Magic will increase.

When an enemy Cepter stops on your territory, you can take their magic as a toll fee.

You will gain a small amount of magic (19G + number of the current round) at the beginning of every turn.